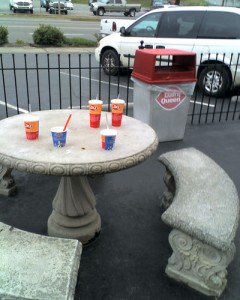 In addition, Travel + Leisure says that big cities are known for being direct. Directness can be interpreted as rude, but it might also help you get negative details removed from your credit report or convince a creditor to lower your interest rate or remove a late penalty. For example, “I apologize for being late. Would you consider removing the late penalty since I’ve always been a timely consumer?” is more direct and less rude than “I was only two days late. These late fees are too high anyway.”

The ruder cities have better credit scores and the opposite is generally true. Several cities with the lowest average credit scores are in the Southern states, e.g. Mississippi, Texas, Louisiana, and Georgia. Several smaller cities in the South rank higher for friendliness in Travel + Leisure’s poll. Perhaps residents in these slower-paced cities are not as aggressive when it comes to maintaining their credit, letting payments slip or accepting “no” for an answer.

Two larger Southern cities, Atlanta and Orlando buck the trend. Both ranked in the top 10 rudest cities, have credit scores lowers than the national average.

You don’t have to be rude or grumpy to get a better credit score, but you should be aggressive about improving your credit rating and direct when you’re dealing with businesses in the credit industry.

Don’t give up on credit disputes, settlement negotiations, and pay for delete offers if you’re not successful the first time. Wait a few weeks and try again. You may get a different customer service representative or perhaps the creditor’s position has changed.

Make sure companies follow through on their promises. If you have a signed pay for delete letter, follow up to be sure the item was actually deleted from your credit report after you’ve paid.

Don’t just twiddle your thumbs – take action. New Yorkers are known for being in a rush. Though you shouldn’t rush through your credit repair plan, you don’t want to miss important details, you should treat your plan with urgency.